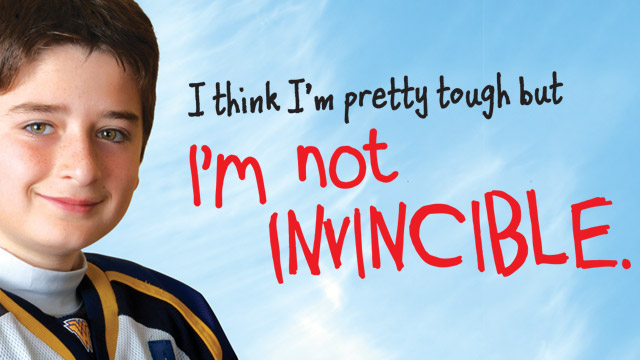 A family's experience with concussion

In February 2012, during a hockey practice drill, Nathan Fraser, age 12, sustained a concussion. In the nine months since the accident, Nathan and his parents, Christine and Adam, have learned about the symptoms of concussion, the steps to take if a concussion occurs, and how to play safe to minimize the likelihood of a concussion.

“It happened during a practice, during an ordinary drill with my teammates,” said Nathan. “I was the defenseman on a two-on-one drill. I don’t remember what happened, but I was told afterwards that one of the forwards passed the puck up to the other one. The other forward wasn't paying attention so he missed the pass. The puck went down the boards and we both started chasing after. He did a superman dive for the puck, but I was right there and I couldn’t stop myself. So I tripped over him and I went head first into the boards. I hit my head on the ice and the boards.”

Nathan’s mom, Christine, was in the stands when the accident happened. “They figure he was unconscious for anywhere between 30 seconds and a minute,” said Christine. “When he came to on the ice, he started to cry and the trainer was asking him questions. He lay on the ice for about 10 minutes and then they picked him up and brought him to where I was sitting. I carried him to the car in his equipment and took him to the hospital.”

“The next thing I remember is being at the hospital,” said Nathan. “My memory is foggy, but I know I was in a room with a doctor and he was asking me questions, doing tests with a pen to check my vision, and checking how strong I was. Afterwards he said I had a pretty bad concussion and then he let me go home.

“Immediately after the accident, I had headaches, and was off balance, dizzy and nauseous. Then, about 48 to 72 hours later, I started to become sensitive to light and sound, I was slurring my speech, my arms and legs felt weak, and I was really tired all the time.”

The concussion put a halt to all of Nathan’s regular activities. “I really just lay on the couch all day,” he said. “I had to wear sunglasses pretty much all the time, and I wore special earmuffs for the sound. When my dogs would bark I would almost start crying because it hurt my ears so much. I couldn’t watch TV: I would have to face away from it and the volume would have to be very low.”

“I was out of school for close to five months,” Nathan said. “I don’t think my friends and classmates really understood what was happening to me. It’s hard to understand if you haven’t gone through it yourself. Most people think if you hit your head you can rest for a few weeks and then go right back to school and playing sports. Maybe you’ll have a slight headache and that’s it.”

Even Nathan’s parents weren’t sure what to do at first, or where to turn for help. “We searched on the Internet for information on concussion and treatment,” Christine said, “and we finally found people who helped us to understand it and connected us with specialists.”
One of the keys to Nathan’s recovery was complete physical and mental rest with very gradual, step-by-step return to activity.

“At first my parents would ask me simple questions like ‘What sound does a cow make?’, and I wouldn’t be able to answer, or I’d give the wrong answer.”

“My parents didn’t try getting me to read until a month or two after the accident,” said Nathan. “At first I was having trouble reading Level 1 books with simple sentences, where new words are added one at a time: ‘It was hot. It was very hot…’ But by September I was reading Harry Potter and I finished the whole series in less than two months. I started reading them again just over a week ago and I’ve already finished the third book. I’m really fast now.”

For Nathan’s physical rehabilitation, he started working with a physiotherapist. “At first he would just examine me, check my neck and monitor my recovery. Then as I got a bit better he worked on my balance and coordination. At every level he would monitor me for headaches and other symptoms. Eventually he got me running. After that, I saw a neurologist who gave me the “all clear”.

“Over the summer I started going to the gym and using the treadmill and rowing machines for cardio and strength training. I liked the TRX® machine where you use two straps and pull yourself up. It was pretty cool.”

Eventually, Nathan put on his skates and helmet again and got back on the ice. “I’ve been on the ice about 10 times so far,” he said. “It’s been very gradual. Just doing some simple exercises and drills.”

When Nathan does return to sports, he recognizes the importance of playing smart. “I’ve been learning how to protect myself better in a game. I’ll keep my head up so I’m aware of my surroundings. And if I’m going after a puck in the corner, now I’ll come in on an angle. I can see the players around me and avoid being hit from behind. And I can brace myself if I’m going to be hit.”

Nathan and his parents would also respond differently if another concussion were to happen. “I’d be aware of every little sign of dizziness or headache,” said Nathan. “If I had a headache, I’d take time off and go through the “return to play” steps, to make sure I was fine before going back. I wouldn’t just try and shake it off.”

Nathan and his parents are spreading their first-hand concussion education to others. “I tell my friends to really take it seriously,” Nathan said, “A lot of my friends really don’t know what a concussion is. They’ll get headaches or they’ll be dizzy and see stars, but sometimes they’ll hide it. They’ll take a quick break and then go back out and play again. I tell them that once they get the slightest headache, stop playing. Follow the gradual step-by-step “return to play” protocol until you are 100 per cent again.

Concussions can happen to anyone, but the key is to recognize them when they do happen, and to know how to respond.

In Nathan’s case, he’s looking forward to the future. “Nathan has no memory of his life before the accident,” Nathan’s dad, Adam, said. “His memory could come back in time, but no one knows for sure.”

“Two years before I got the concussion we went to Disney World,” said Nathan, “and we went to all the different parks and on all the rides. And I can’t remember a thing. But this summer we went back to Universal. And next year we’re thinking of redoing Disney World. Maybe I’ll get my memory back of those trips. But the most important thing for me is to make new memories.”