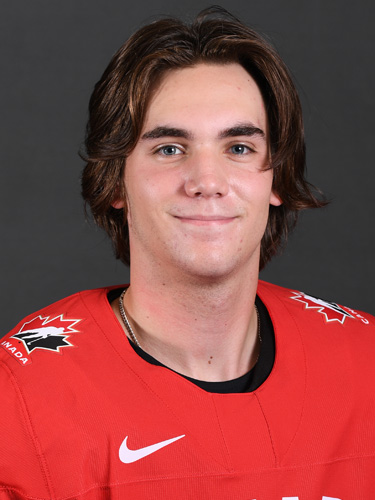 Moose Jaw’s fifth-round selection, 100th overall, in the 2018 WHL Bantam Draft … 2019-20: 10th in Brooks scoring … Second in scoring among Brooks defencemen … 10th in scoring among AJHL defencemen … Set a career high with five points (5A) on Feb. 17 vs. Camrose … 2018-19: Won Canada’s National Junior A Championship with Brooks … Won the AJHL championship with Brooks … Won a bronze medal with Alberta at the 2019 Canada Winter Games in Red Deer, Alta. … Minor Hockey: Lists his father, Colin, as his favourite minor hockey coach … Won the CSSHL championship (U15 Prep) with OHA Edmonton in 2018 … Captained the Beaumont Braves to a gold medal at Alberta provincials (U13 AA) in 2016 … Won a gold medal with Beaumont at Alberta provincials (U10 AA) in 2014

Son of Colin and Charla … Has one sister, Ashlyn … Favourite NHL team growing up: Philadelphia Flyers … Favourite player: Nathan MacKinnon … Has committed to the University of Wisconsin (2021-22)

2018 U17: CAN-R 4 – FIN 3 OT (Preliminary)
Jarvis tucked in the OT winner to help Red finish prelims on a high.
Accept
Our sites use cookies to help streamline your experience and enable us to plan future improvements. By continuing to use our site, you consent to cookies being used. For more information about how Hockey Canada handles the information we collect, please review our privacy policy.
© Copyright 2021 Hockey Canada