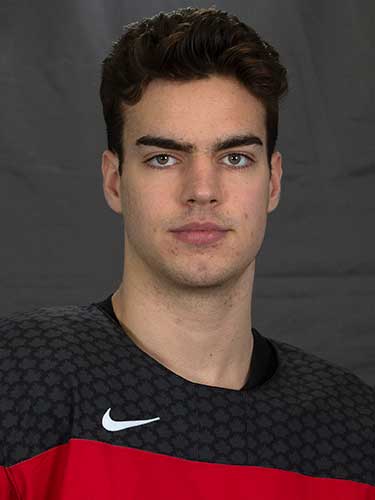 Ottawa’s second-round selection, 31st overall, in the 2016 OHL Priority Selection … 2018-19: 12th in Ottawa scoring … Second in scoring among Ottawa defencemen … Fourth in the OHL in plus/minus (+50) … Set a career high with three points (1G 2A) on April 5 vs. Sudbury … 2017-18: 13th in Ottawa scoring … Fourth in scoring among Ottawa defencemen … 2016-17: 20th in Ottawa scoring … Fifth in Ottawa rookie scoring … Seventh in scoring among Ottawa defencemen … Minor Hockey: Lists Ken Strong as his favourite minor hockey coach … Won a gold medal with GTHL Blue at the 2016 OHL Gold Cup … Reached the final of the 2016 OHL Cup with the Toronto Marlboros (Minor Midget AAA) … Played in the 2016 GTHL Top Prospects Game … Won the GTHL championship and a gold medal at Ontario provincials with the Mississauga Rebels (Peewee AAA) in 2013 … Won the GTHL championship with Mississauga in 2010 (Minor Atom AAA), 2011 (Atom AAA) and 2012 (Minor Peewee AAA)

2021 WJC: CAN 5 – RUS 0 (Semifinal)
Levi and Cozens led Canada past Russia and into the gold medal game.
Accept
Our sites use cookies to help streamline your experience and enable us to plan future improvements. By continuing to use our site, you consent to cookies being used. For more information about how Hockey Canada handles the information we collect, please review our privacy policy.
© Copyright 2022 Hockey Canada