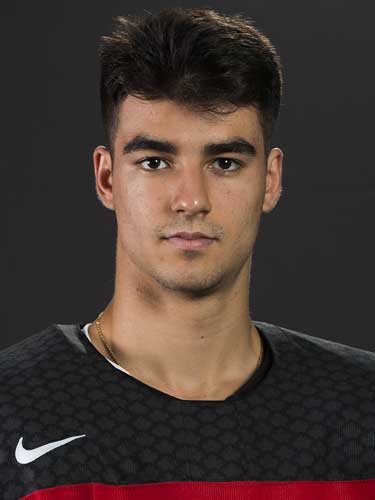 Saint John’s first-round selection, first overall, in the 2015 QMJHL Entry Draft … Was the first QMJHL player ever granted exceptional status … 2019-20: Made his AHL debut on Oct. 5 vs. Chicago … Scored his first AHL goal and recorded his first AHL point on Oct. 25 vs. Manitoba … 2018-19: Led Drummondville in scoring … Fourth in QMJHL scoring … Co-led the QMJHL in shorthanded goals (7) … Second in the QMJHL in plus/minus (+63) … Tied for third in the QMJHL in assists … Seventh in the QMJHL in goals … Named to the QMJHL First All-Star Team … Set a career high with six points (3G 3A) on Nov. 24 vs. Moncton … 2017-18: Traded from Saint John to Drummondville on Dec. 19 … Led Drummondville in scoring … Nominated for the Trophée Michael-Bossy as QMJHL top professional prospect … Captain with Saint John before trade … 2016-17: Won the QMJHL championship with Saint John … 11th in Saint John scoring … 2015-16: Ninth in Saint John scoring … Led Saint John in rookie scoring … 10th in QMJHL rookie scoring … Named rookie of the year with Saint John … Minor Hockey: Lists Domenic Romano as his favourite minor hockey coach … Named to the all-star team at the 2015 Reebok Midget AAA Challenge … Won a gold medal with Quebec Blue at the 2015 QMJHL Gatorade Excellence Challenge … Played for Quebec as an under-age player at the 2015 Canada Winter Games in Prince George, B.C., finishing fourth

2021 WJC: CAN 5 – RUS 0 (Semifinal)
Levi and Cozens led Canada past Russia and into the gold medal game.
Accept
Our sites use cookies to help streamline your experience and enable us to plan future improvements. By continuing to use our site, you consent to cookies being used. For more information about how Hockey Canada handles the information we collect, please review our privacy policy.
© Copyright 2022 Hockey Canada