YARMOUTH, N.S. – Maxim Mauerhofer stopped all 42 shots directed his way for a shutout in his tournament debut, leading Switzerland to a 2-0 win over the Czech Republic on Wednesday night at the 2013 World Junior A Challenge. 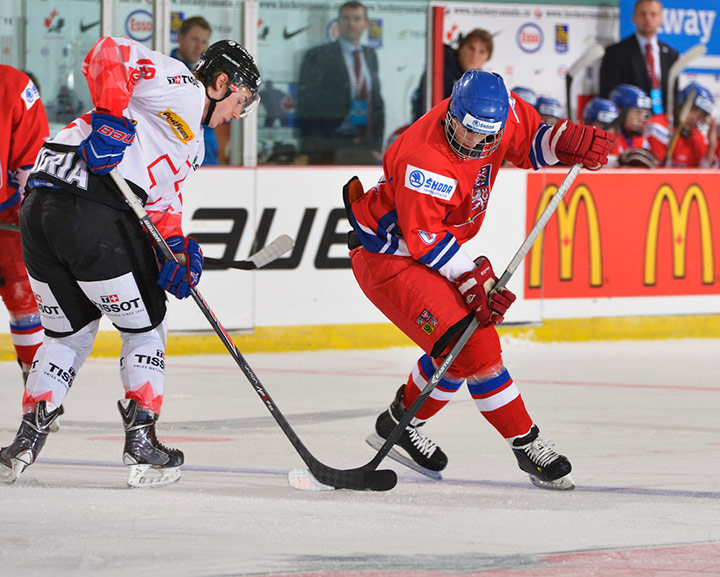 The win clinches second place in Group B for the Swiss, who will face the third-place team from Group A in Thursday’s quarter-finals (time TBD).

Félix Girard and Luca Hischier had the goals for Switzerland; both players added assists, while Thomas Studer was also in on both goals, chipping in with two helpers.

After a scoreless first period, during which the Czech Republic held a 14-7 advantage in shots on goal, the Swiss opened the scoring 4:30 into the middle frame when Girard batted in the rebound of a Hischier shot for a 1-0 lead.

Hischier doubled the Swiss advantage on a power play at the 12-minute mark of the second period, stepping in off the right wing and wiring a wrist shot over the glove of Czech netminder Karel Vejmelka.

That would be all the offence Switzerland would need thanks to Mauerhofer, who made 14 saves in the first period, 12 in the second and 16 more in the third to record the second shutout by a Swiss goaltender in World Junior A Challenge history.

Both teams will wait for the result of Wednesday night’s preliminary round finale between Canada East and the U.S. to find out who their quarter-final opponent will be.

Tweets
Follow us on Twitter
Recent News
Most Popular
November 10, 2013
United States wins gold medal at 2013 World Junior A Challenge
Jason La Rose - November 9, 2013
From inline to the ice
Tommy Nixon’s Team Canada experience is something a little different
November 8, 2013
United States and Russia to meet in gold medal game at 2013 World Junior A Challenge
Ryan Dittrick - November 7, 2013
The Road Less Travelled
Will Acton’s journey from the World Junior A Challenge to the NHL has been an adventurous one
Tieja MacLaughlin - November 6, 2013
Following family footsteps
Nick Schmaltz has taken a familiar path to the World Junior A Challenge
MORE
Accept
Our sites use cookies to help streamline your experience and enable us to plan future improvements. By continuing to use our site, you consent to cookies being used. For more information about how Hockey Canada handles the information we collect, please review our privacy policy.
© Copyright 2022 Hockey Canada