YARMOUTH, N.S. – Michael Hügli was the overtime hero for Switzerland, scoring on a power play 3:54 into the extra period to give the Swiss a 5-4 win over Canada East and a spot in the semifinals at the 2013 World Junior A Challenge. 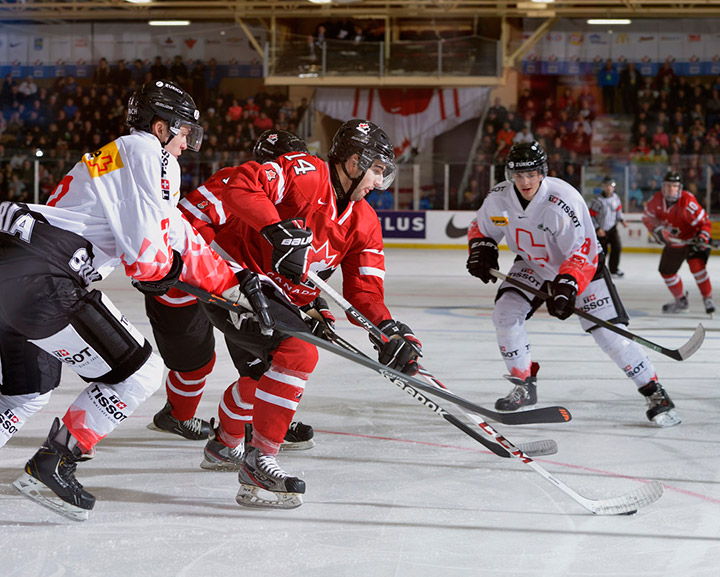 The victory sends the Swiss to a Friday night match-up with the United States (8 p.m. AT) with a spot in Sunday’s gold medal game on the line. Canada West will face Russia in the other semifinal (4 p.m. AT).

After the Swiss worked the puck around late in an overtime power play, Hügli snapped a shot from the face-off dot to the left of Jordan Piccolino (Pierrefonds, Que./Cornwall, CCHL) that eluded the Canada East netminder.

The goal capped Switzerland’s comeback from a 4-2 third-period deficit, and leaves Canada East as the first Canadian team to miss out on the semifinals in the eight-year history of the World Junior A Challenge.

Michael Loosli, Luca Hischier, Félix Girard and Patrick Insir had the goals in regulation time for the Swiss, who are into the semifinals for the third time in as many appearances at the tournament.

Switzerland won bronze at both the 2010 and 2012 World Junior A Challenges.

Marly Quince (Thunder Bay, Ont./Cornwall, CCHL) scored a pair of goals for Canada East, which got singles from Taylor Best (Whitby, Ont./Whitby, OJHL) and Mike Soucier (Caledon, Ont./Wellington, OJHL) in a losing cause.

The Swiss struck early, with Loosli beating Piccolino off the wing just 2:45 in, but Best drew the Canadians even on a power play late in the opening frame.

The floodgates opened in the third period, as the two teams combined for five goals in just under eight minutes.

Soucier doubled the Canadian lead just 1:52 into the final frame, banging in a rebound, but Hischier’s power play goal at 4:05 made it a one-goal game again.

The back-and-forth continued just 57 seconds after Hischier’s goal, when Quince’s tipped in his second of the game to restore the two-goal advantage, but it took the Swiss only 1:55 to get back to within a goal, this time off the stick of Girard.

Incir capped the wildness at 9:32, tying the game and setting up Hügli’s heroics.

While the Swiss will get ready for Friday’s semifinals, Canada East will travel to Liverpool, N.S., on Saturday afternoon (4 p.m. AT) to face the Czech Republic in the fifth-place game, trying to avoid becoming the first Canadian team to go winless at the tournament.

Tweets
Follow us on Twitter
Recent News
Most Popular
November 10, 2013
United States wins gold medal at 2013 World Junior A Challenge
Jason La Rose - November 9, 2013
From inline to the ice
Tommy Nixon’s Team Canada experience is something a little different
November 8, 2013
United States and Russia to meet in gold medal game at 2013 World Junior A Challenge
Ryan Dittrick - November 7, 2013
The Road Less Travelled
Will Acton’s journey from the World Junior A Challenge to the NHL has been an adventurous one
Tieja MacLaughlin - November 6, 2013
Following family footsteps
Nick Schmaltz has taken a familiar path to the World Junior A Challenge
MORE
Accept
Our sites use cookies to help streamline your experience and enable us to plan future improvements. By continuing to use our site, you consent to cookies being used. For more information about how Hockey Canada handles the information we collect, please review our privacy policy.
© Copyright 2022 Hockey Canada