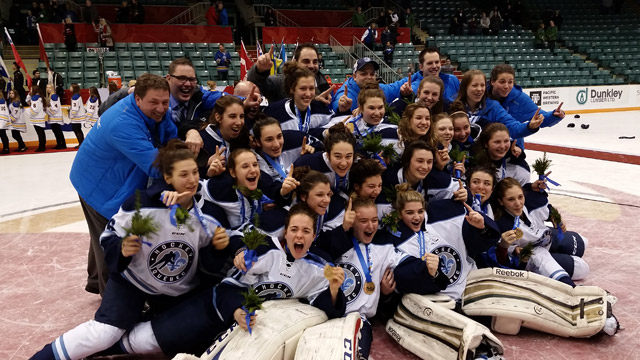 Replacing the National Women's Under-18 Championship every four years, the Canada Winter Games highlights the future of the game. Women’s hockey was added to the schedule beginning with the 1991 Games in Charlottetown, P.E.I., when Hayley Wickenheiser scored the gold-medal-winning goal for Alberta as a 12-year-old, giving a glimpse of what was to come during a record-setting career with Canada’s National Women’s Team.

Ontario (4G 1S 1B), Quebec (1G 4S 3B) and Alberta (3G 0S 2B) have dominated the medal count, winning 19 of the 24 medals awarded. The women’s hockey tournament has produced an impressive roster of alumnae – of the 21 players who won gold at the 2014 Olympic Winter Games, 15 made an appearance at the Canada Winter Games.

2011 Canada Winter Games (Women's Hockey)
Halifax, N.S.
February 11-27, 2011
Home
Accept
Our sites use cookies to help streamline your experience and enable us to plan future improvements. By continuing to use our site, you consent to cookies being used. For more information about how Hockey Canada handles the information we collect, please review our privacy policy.
© Copyright 2022 Hockey Canada