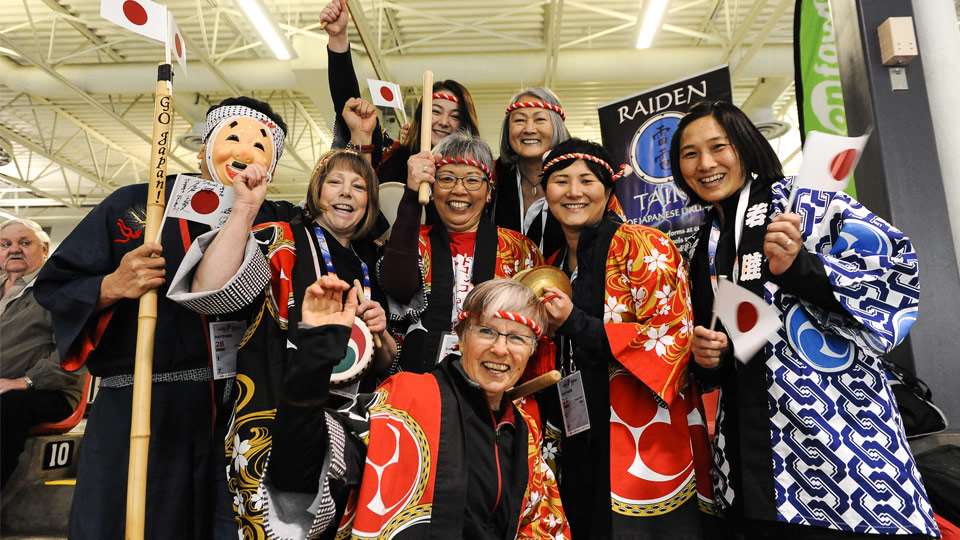 Before and during the tournament, on the ice and off of it, the B.C. interior has taken care of Team Japan at the 2016 IIHF Women’s World Championship

Canada’s National Women’s Team is the unquestioned crowd favourite at the 2016 IIHF Women’s World Championship – as it should on home ice – but there’s another country that’s getting its share of attention.

At the McArthur Island Sport & Event Centre, dozens of fans file into the stands wearing red and black jerseys with ‘JAPAN’ and the rising sun emblazoned on them, carrying drums and flags galore.

With a Japanese population of approximately 1,000 in and around the city, the Kamloops Japanese Canadian Cultural Association takes pride in representing the Japanese culture.

“The organizing committee reached out to us and asked if we’d be interested in supporting the Japanese team, and I was excited to get involved,” said Uyeda.

A traditional Japanese taiko drumming group attended several of Japan’s preliminary round games, as well as the Canada-United States match-up at the Sandman Centre on Monday, performing in the intermission.

For Uyeda, it’s a unique opportunity to combine his passion for hockey with his pride in his heritage.

“I’m a big hockey fan. I played minor hockey, junior hockey, senior hockey, I play old-timers hockey here in Kamloops,” he says. “It’s been an honour for us to have them here. I doubt we’ll ever get this chance again to have them here in our hometown. It’s a great way to show off Kamloops.”

While Japan may not be seeing positive results on the ice against stiff competition, Uyeda is still excited to watch them compete. “They’re trying hard, they’re doing the Japanese community here proud.”

The pride extends an hour east to Salmon Arm, B.C., where the Japanese held their pre-worlds camp last week. Roy Sakaki of the Salmon Arm Minor Hockey Association was excited to host any of the eight teams.

“We had the ice to host a pre-stage camp, and lo and behold, it turned out to be Japan, which was really neat.”

The team trained twice a day at the Shaw Centre and was seeking competition for a pre-tournament game, so Sakaki organized an exhibition game against the Thompson-Okanagan Lakers of the B.C. Female Midget AAA Hockey League. He officiated the game, alongside fellow Japanese-Canadian Jeff Fukomoto and SAMHA referee-in-chief Matt Davies.

“I was called a homer no matter what side I called a penalty for,” joked Sakaki. “I was so impressed with the skating – we saw all week that Japan was a really fast, skilled team. Our Midget girls put up a great fight.”

After the game, the teams had dinner together, which brought on a combining of cultures.

“To have Japan come here, it was really neat,” Sasaki says. “We don’t have much multiculturalism here, so it was great for the community and it was a really nice cultural exchange for everyone involved.”

Having the Japanese in Salmon Arm brought back memories for Sakaki. “In 1960, the Japanese men’s team was set to compete in the Winter Olympics in Squaw Valley, and they made a stop in Kamloops. I remember them playing a game at Memorial Arena – I presented a stick to the team that was signed by members of the Toronto Maple Leafs. Having another Japanese team here so many years later is really special.”

The fans have proven they appreciate the Japanese, if the jerseys, signs, and flags in the stands are any indication. It’s about pride, after all, both on and off the ice.