Our love for hockey lies in the hearts of volunteers from coast to coast to coast, looking to share their passion with all Canadians.

Thank you to the hundreds of thousands who give their time to our game, and congratulations to those recognized as national award winners this year.

To find out more about some of our amazing volunteers go to the Hockey Canada Volunteer Corner. 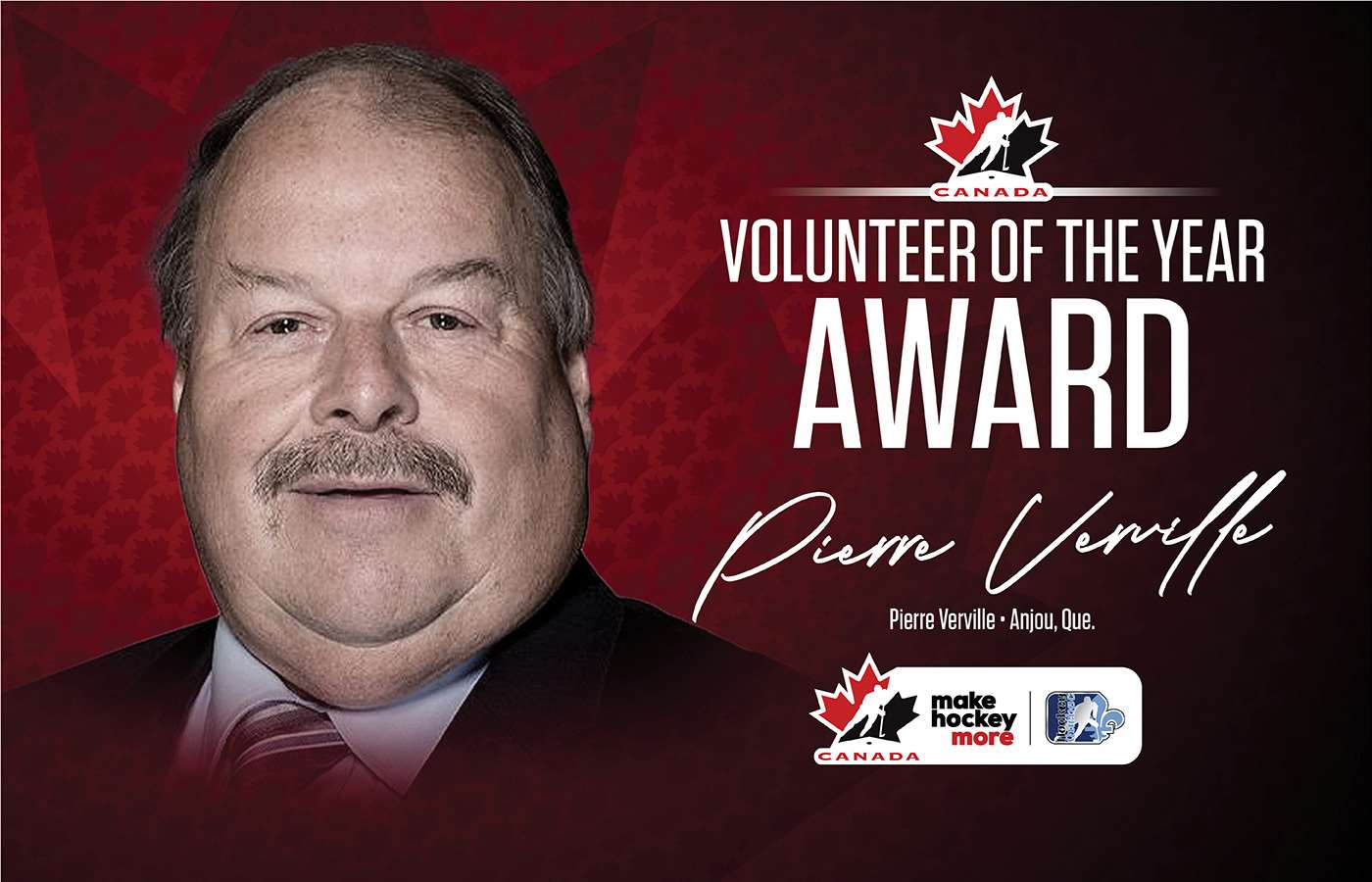 Volunteer of the Year – Pierre Verville

One of the founding members of the Fédération Québécoise de Hockey sur Glace (FQHG), Pierre Verville has dedicated over 50 years to the game as an administrator at the Hockey Canada Member level.

Starting as the hockey coordinator for the city of Charlesbourg in 1971, he worked in that role until 1986. Over those 15 years, he also served as the president of the minor hockey association of the Quebec City region (AHMQ), was a member of the AHMQ Board of Directors, and coordinated the Quebec City region and Chaudières-Appalaches’ provincial championship during that time.

From 1975 to 2012, Pierre was the president of the FQHG for the Quebec City and Chaudières-Appalaches region. He was the chair of four provincial championships and a member of the management commission for close to 10 years. During the first 27 years of that tenure, Pierre also served as a member of the Hockey Quebec Board of Directors. He has been the vice-president since 2012.

Hockey Quebec and the entire Hockey Canada family is grateful for volunteers like Pierre who give of their time, energy and knowledge over the course of decades, helping to improve the game with each passing year. 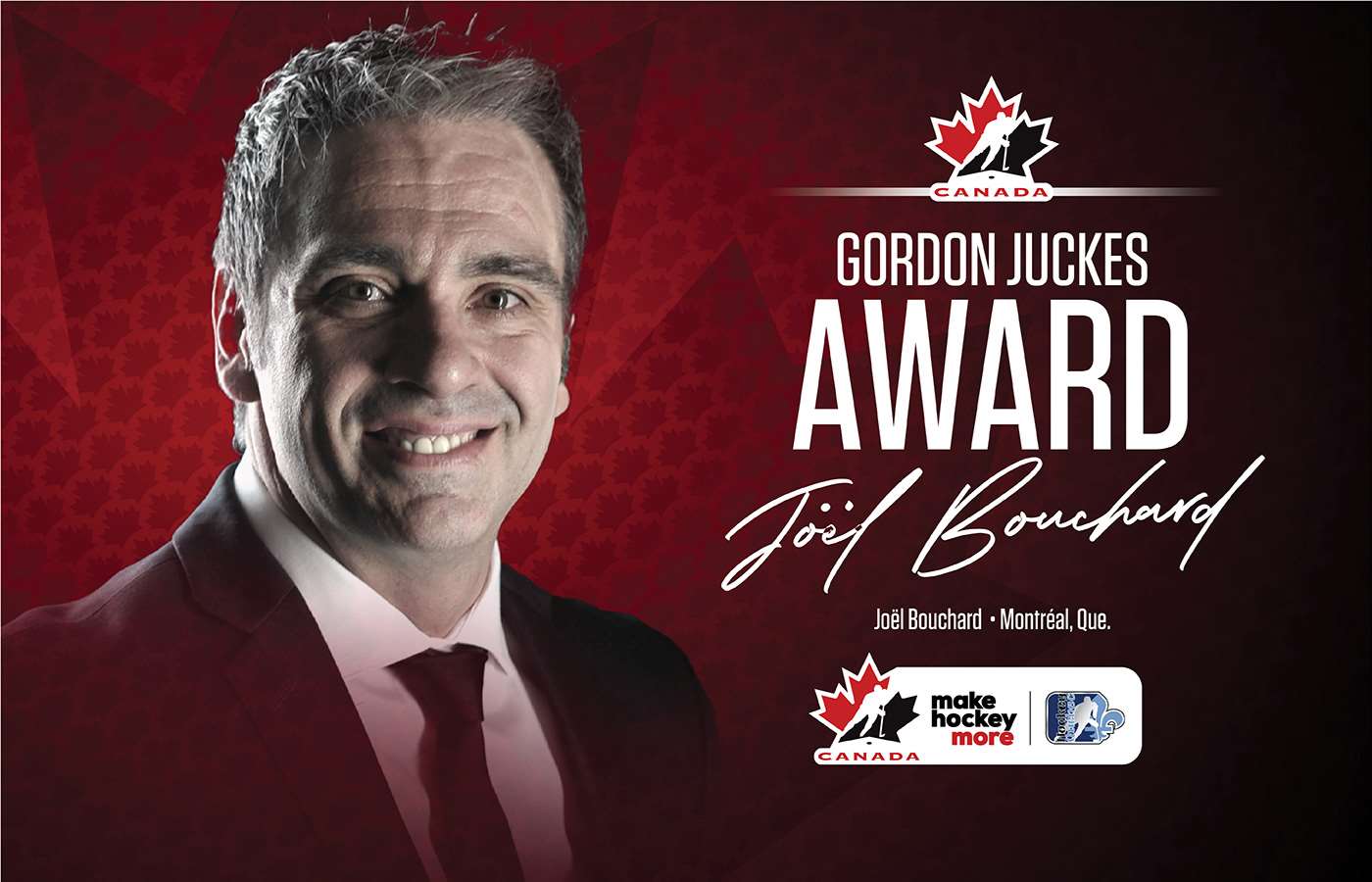 There are few as enthusiastic about player development at the Member and national level as Joël Bouchard. A long-time advocate for increasing development opportunities in junior hockey, Joël also helped redesign the Hockey Canada Program of Excellence (POE).

Going back just over a decade, Joël took a major step into the administration of the game as the general manager of the Armada de Blainville-Boisbriand of the Quebec Major Junior Hockey League from 2011-18. He also served as head coach of the Armada from 2014-18 before moving to the Laval Rockets of the American Hockey League.

From 2013 to 2016, Joël helped restructure the POE management group, notably leading the under-17 program during that time. He then transitioned into the under-20 management group with Canada’s National Junior Team, working on that program until 2018.

For Hockey Quebec, Joël has served as a guest speaker for High Performance 1 coaching courses and has been an expert advisor on development since 2016. He also works with minor hockey organizations in a variety of ways, always looking to continue growing the game.

Joël’s support and vision of the national Program of Excellence has helped lead many young athletes to success and improve the legacy of Team Canada as a whole. 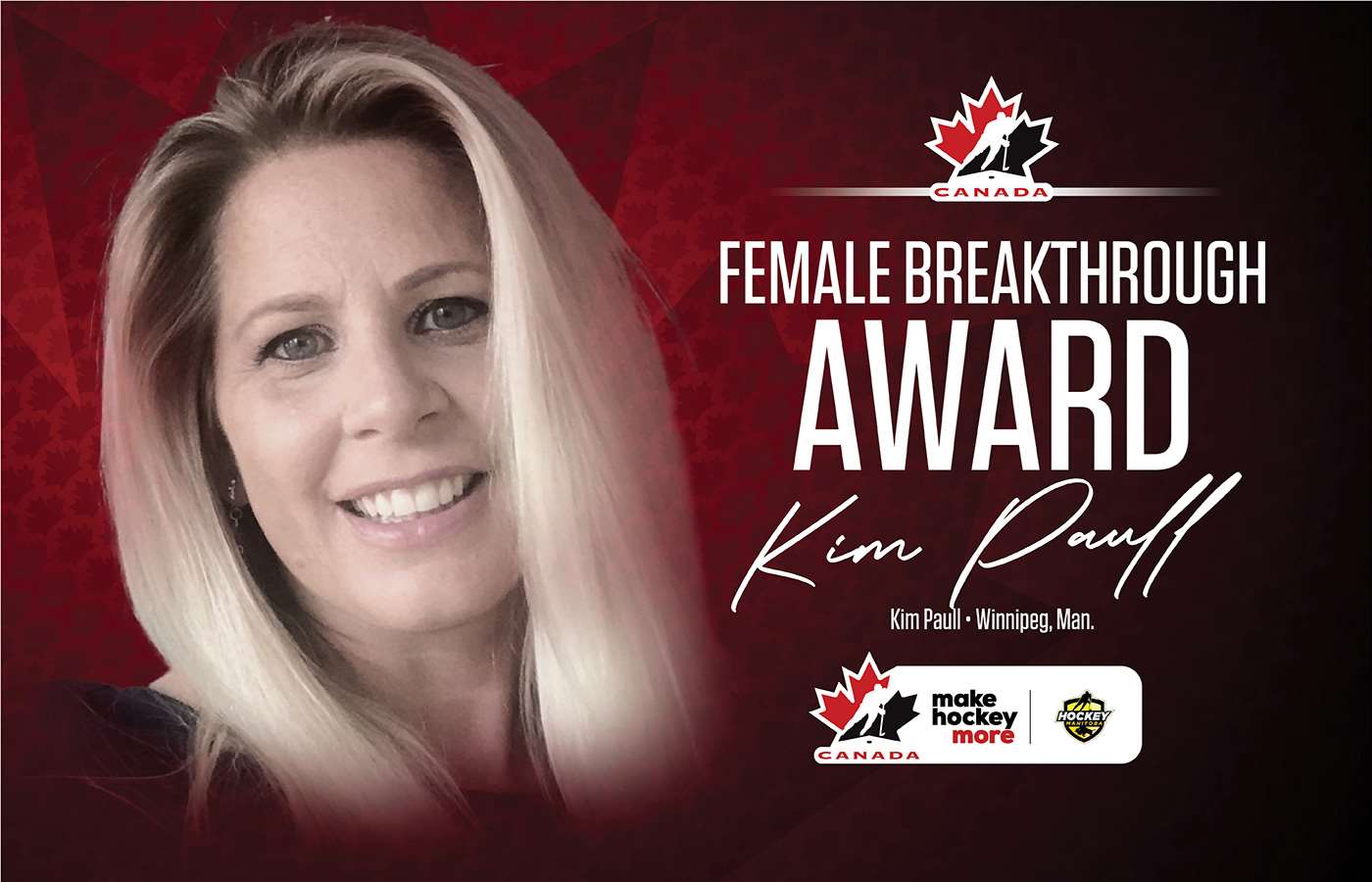 In just a few short years, Kim Paull has established herself as an instrumental member of the Hockey Manitoba Board of Directors, helping to grow women’s hockey programs while bringing a fresh outlook to the game.

Starting at the grassroots in Macdonald, Man., Kim volunteered as a team manager and helped recruit players for the first-ever under-7 girls-only team in 2016-17. She also organized development sessions lead by women. The following season she was the Macdonald women’s director, taking a leadership role in an Esso Fun Day within the minor hockey association, while outside of her own organization she created the Perimeter Female Hockey Alliance, an exhibition U7 girls-only league.

Her ascension through the hockey ranks continued as she became a Pembina Valley vice-director from 2018-20, hosting grassroots jamborees for girls aged 2-6. She also worked closely with the director to create leadership positions for women in coaching and administration. From there, she moved onto the Manitoba Female Hockey League as secretary, founding the Hockey Manitoba Female Coaching Mentorship Program.

Kim’s visionary leadership and passion for the game has created countless other improvements and opportunities for girls and women in the game throughout Manitoba. And her success with everything she touches is leading to a bright future for the women’s game.

Under the leadership of Kim, there is no telling how far women’s hockey in Manitoba will go. 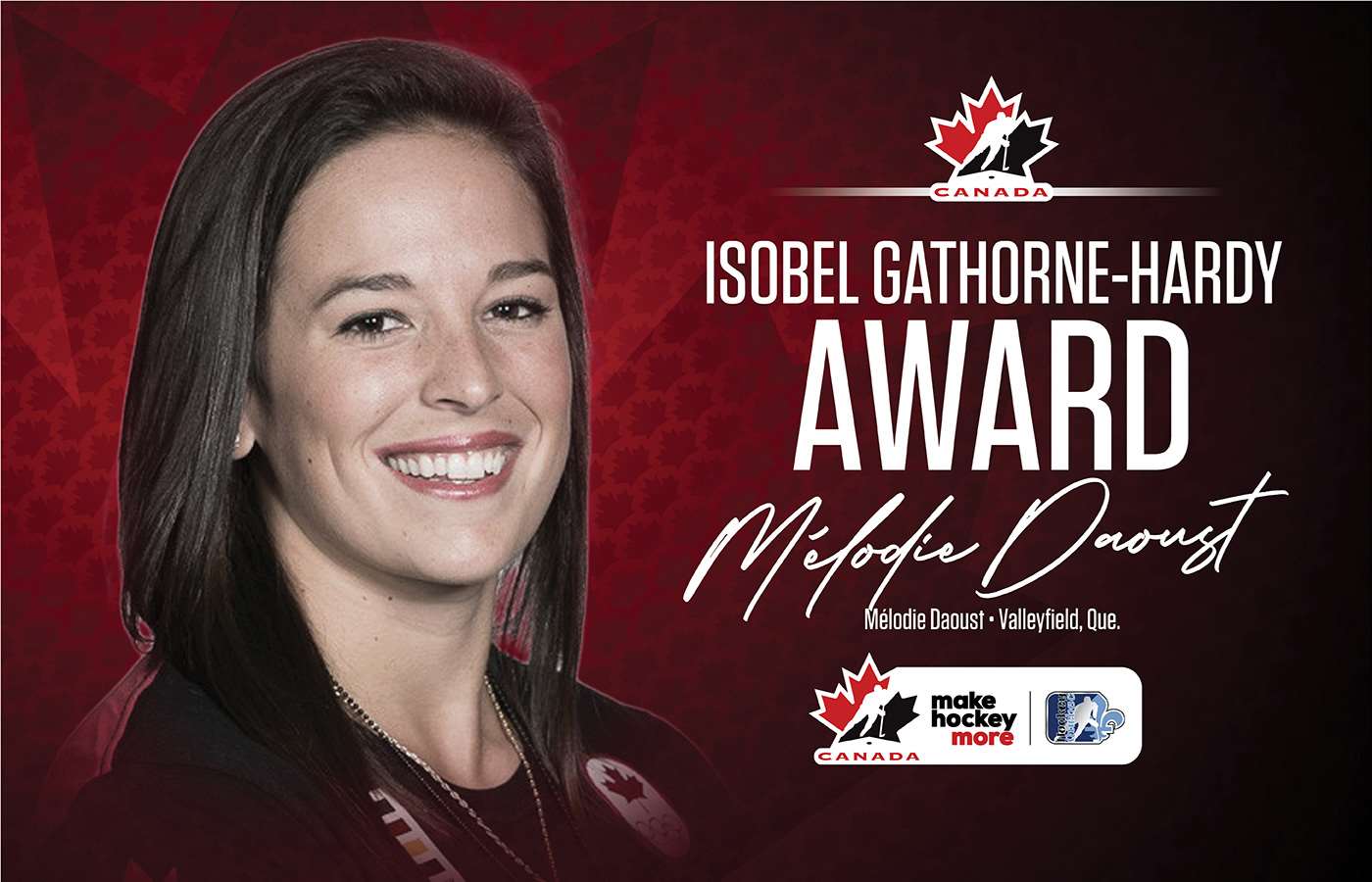 A world champion and two-time Olympic gold medallist, Mélodie Daoust is undoubtably one of the top women’s hockey players in the world, but what she is doing in support tomorrow’s game is just as impressive.

A keen supporter of minor hockey, Mélodie hosts an annual summer hockey school for young girls and is always available to support Hockey Quebec initiatives when asked. She also serves as an assistant coach for the women’s team at the Université de Montréal, sharing her knowledge with the next generation of great athletes.

Off the ice, Mélodie is working to build the brand of women’s hockey by acting as an analyst for TVA Sports and a star of several films highlighting the need for equality and inclusion in the game. Chasing was a video her own initiative, created to give hope to the next generation of young girls.

Mélodie is also working to create a future for those same girls as an advocate for the creation of a women’s professional league. She trains with other Professional Women’s Hockey Players Association members at the Centre 21.02 High Performance Hockey Centre in Montreal, acting as a visible example of what women can achieve in the game.

It is thanks to the efforts of Mélodie that the women’s game is growing and has a bright future. 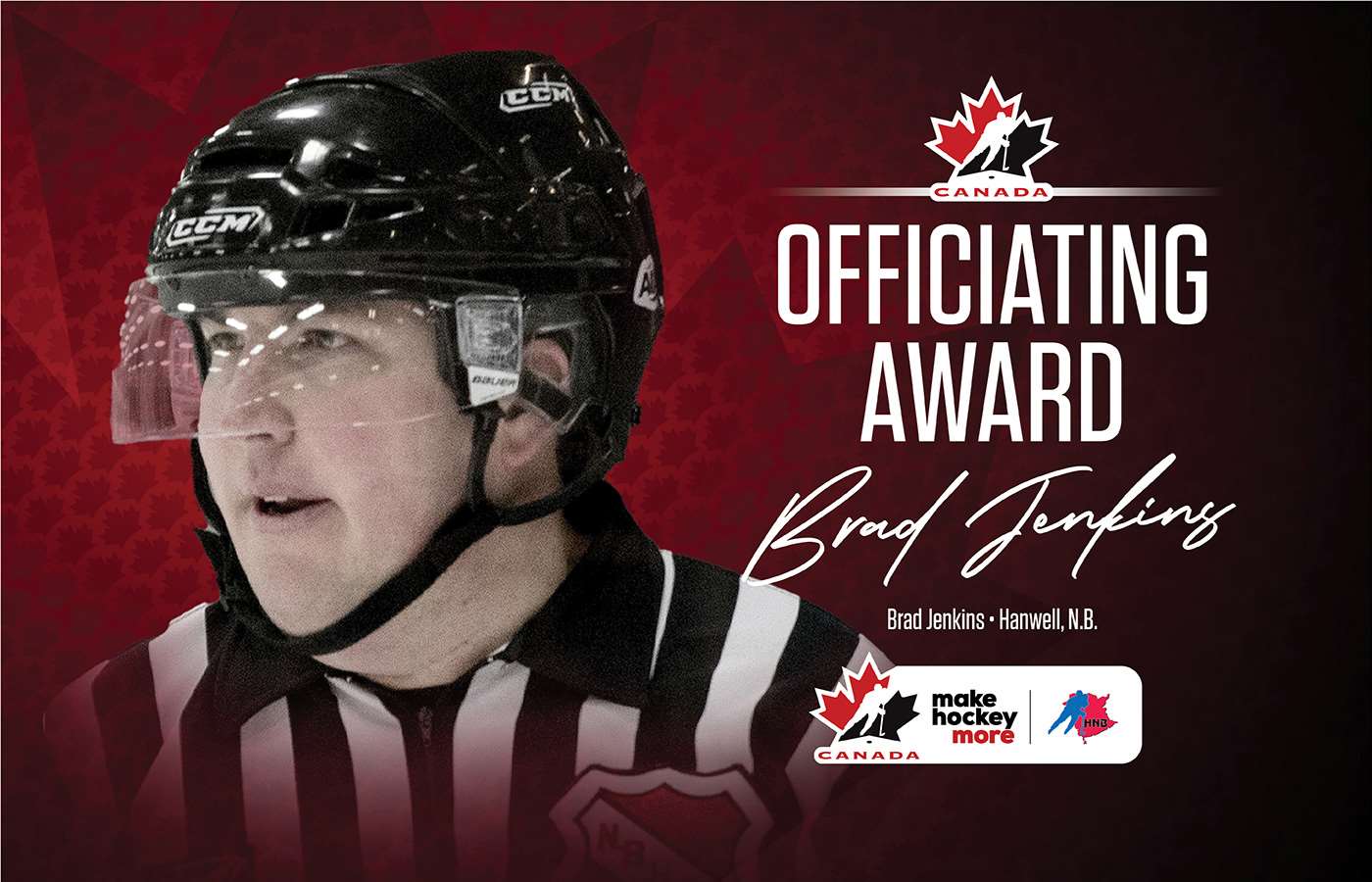 An active on-ice official for Hockey New Brunswick and administrator for the New Brunswick Hockey Officials Association (NBHOA), Brad Jenkins is a dynamic and committed leader in the officiating community.

A Level V (Member High Performance) official, Brad has been working provincial and national championships since 1999, from U15 to university hockey, including the World Under-17 Hockey Challenge in 2001 and the Air Canada Cup (now known as the TELUS Cup) in 2002.

On the administration side, Brad became a Zone 3 lead instructor for Hockey New Brunswick in 2005 after attending a Hockey Canada master course conductor seminar. He started serving as the NBHOA technical director in 2013 and remains responsible for the communication to nine zone directors and 1,000 officials, as well as acting as a support for the referee-in-chief.

More recently, Brad was instrumental in developing the COVID-19 recertification program for New Brunswick officials, ensuring the program was delivered in both official languages. He also advocates for individual advancement of officials throughout the province.

To do so, Brad oversees the development and delivery of the Program of Excellence training program. He also organizes and instructs at clinics, while acting as a supervisor for young officials. In recognition of his strong work as a teacher, coach and administrator, Brad was presented with the Vance Toner Hockey Development Award from Hockey New Brunswick in 2021.

It is because of the great leadership of Brad that the officials’ program is growing to new heights in New Brunswick. 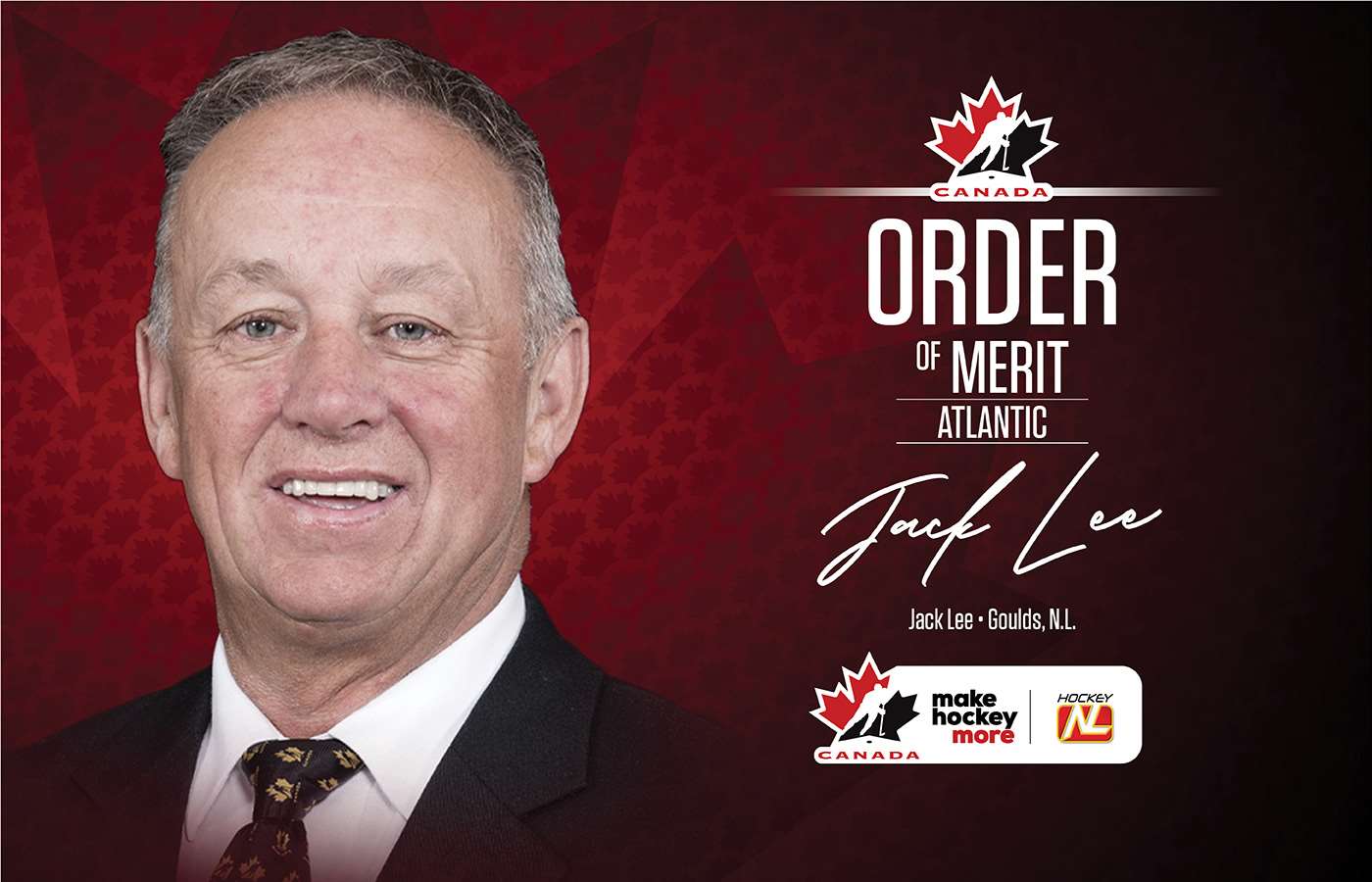 Involved in every aspect and at every level of the game, Jack Lee has been a tremendous steward of the game for Hockey Newfoundland and Labrador and Hockey Canada.

From the time he learned to skate, Jack had a passion for the game. Whether walking to the rink, with his bag on his back or watching the St. John’s Caps play in the Newfoundland Senior Hockey League at the old Memorial Stadium, Jack was always there.

When his three children – Michelle, Mike and Mark – were old enough, Jack jumped in as a coach, taking on roles from minor to senior. When his own kids graduated through the system, Jack became the all-star director with the Mount Pearl Minor Hockey Association, graduating to the role of technical director within the same association.

It was through that role Jack first became involved with Hockey N.L. as the public relations officer for Minor Council, before eventually taking over as chair from 2009-11. This was Jack’s introduction to Hockey Canada administration, which he would become acutely involved with over the following decade as the president of the provincial Member.

Over Jack’s presidency, Hockey N.L. has experienced incredible growth in every aspect of the game: increased player registration and new opportunities for skill development. He was also instrumental in the creation of the Breakaway Foundation, with the mission to provide financial support for hockey families in need.

Jack’s contribution to the game can be summed up with the new mission statement introduced by Hockey Newfoundland and Labrador near the tail end of his time as president – “Foster a safe, fun and inclusive hockey experience.” Which is exactly how Jack has made the game a better place. 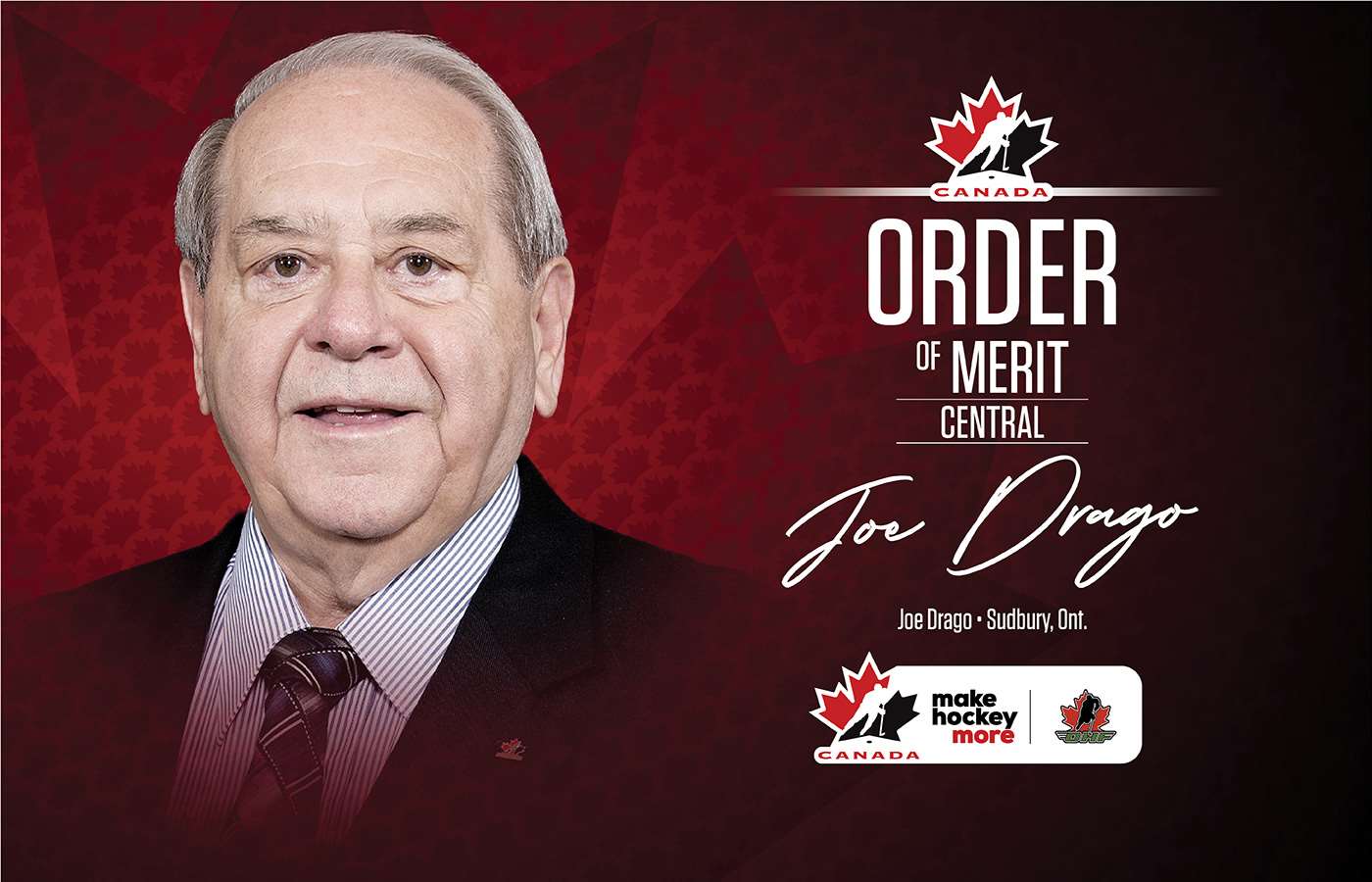 A lifelong fan who turned that passion in volunteering, Joe Drago has been a pillar of the hockey community in northern Ontario and on the national stage for over 30 years.

His long journey through the volunteer administration of the game started in 1998, when Joe served as Junior Council chair with the Ontario Hockey Federation (OHF). He was the OHF vice-president from 2001-05, then president from 2005-11. Joe moved on to the Hockey Canada Board of Directors following his time with the OHF, serving two terms as chair from 2014-18.

Joe’s dedication to the game has been honoured at each of his stops. He is a life member of the Northern Ontario Hockey Association, OHF, NOJHL, CJHL and the Sudbury Wolves. Joe is also an honoured member of the Sudbury Sports Hall of Fame, which has named the coach of the year award on his behalf.

It takes a special individual to dedicate as much of their life as Joe has to hockey and the game is better for it. 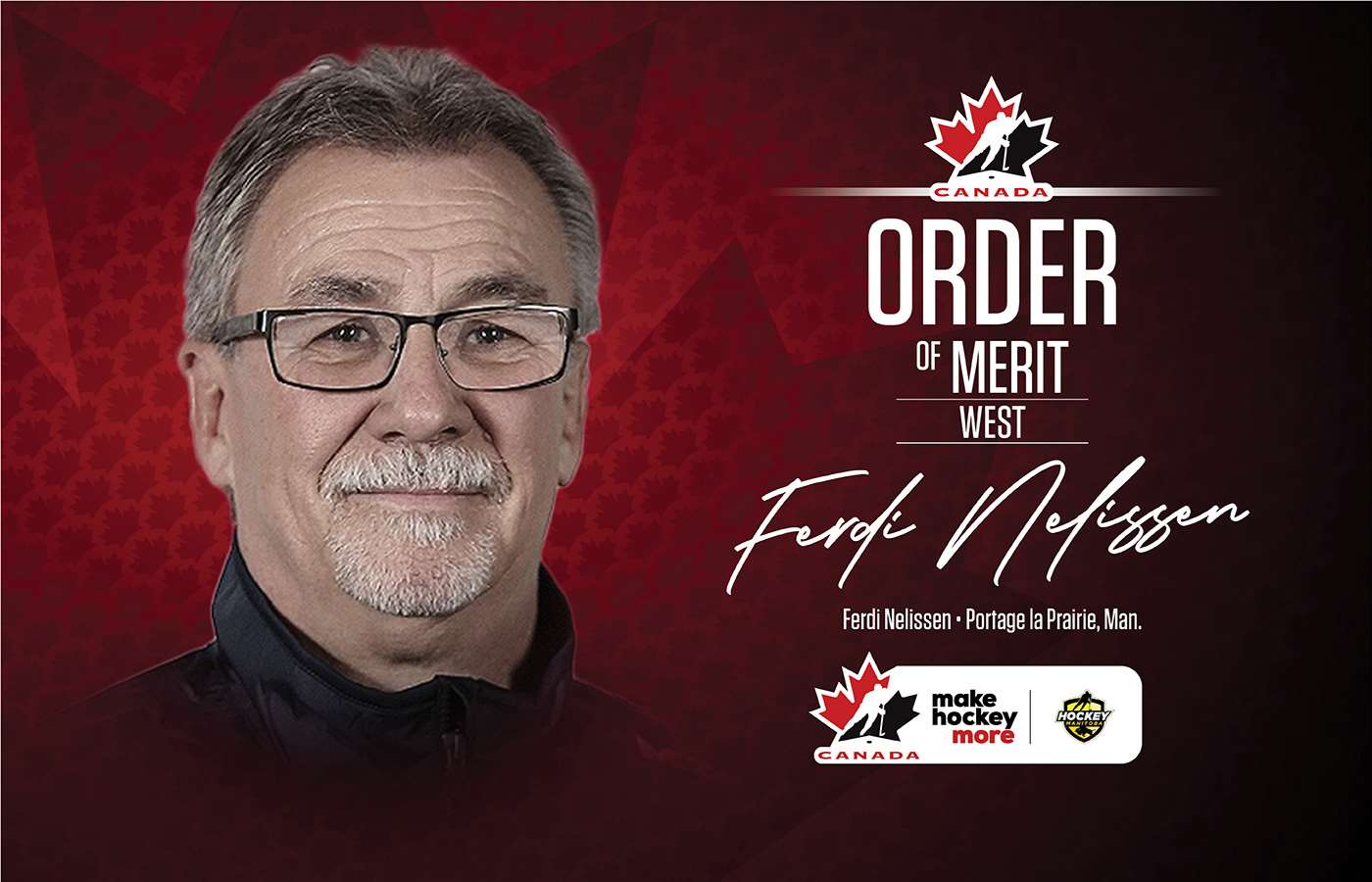 For more than two decades, Ferdi Nelissen has been advocating for and leading the development of women’s hockey in Manitoba, most of that time behind the bench coaching and sharing his love of the game at the grassroots level.

Starting with the MacGregor and Portage Minor Hockey Associations in 1998, Ferdi served as an assistant coach for seven years from U7 to U15, adding head coaching duties to the resume in 2003 with the Portage U13 A team. The following season, he led Morden to a U13 Rural A provincial championship.

One of his crowning coaching achievements came as the head coach of the Central Plains Capitals from 2007-19. In 2015, the team captured the provincial championship and went on to the Esso Cup, the national women’s U18 club championship, finishing in fourth place.

But Ferdi would probably tell you his greatest success as a coach has actually been the development of athletes, including many who have represented their own regions at the Manitoba Games over the last decade. He also initiated, promoted and operated the Central Plans Capitals pre-season showcase, which is considered one of the top women’s hockey showcases in western Canada for university scouts and recruiters.

Ferdi’s unlimited enthusiasm for the game has made him a pillar in the Manitoba sporting community and an icon for the women’s game in the province.

Accept
Our sites use cookies to help streamline your experience and enable us to plan future improvements. By continuing to use our site, you consent to cookies being used. For more information about how Hockey Canada handles the information we collect, please review our privacy policy.
© Copyright 2022 Hockey Canada