Benefits of half-ice for U9 hockey

Opportunity for development increases as the size of the rink decreases

There can be concerns from parents about how small-area games may impact their child’s hockey development, but parents should trust Hockey Canada and its research. Putting young players into a competitive environment too early will compromise their development; they need to be placed into competitive situations that suit their age-specific abilities. This is why Hockey Canada’s Long-Term Player Development Model is so important.

Dividing the playing surface is a decision that has been made in consultation with experts in athlete development. It is important to understand the benefits of half-ice hockey and why Hockey Canada has a national policy ensuring U9 hockey is played in smaller, modified spaces. 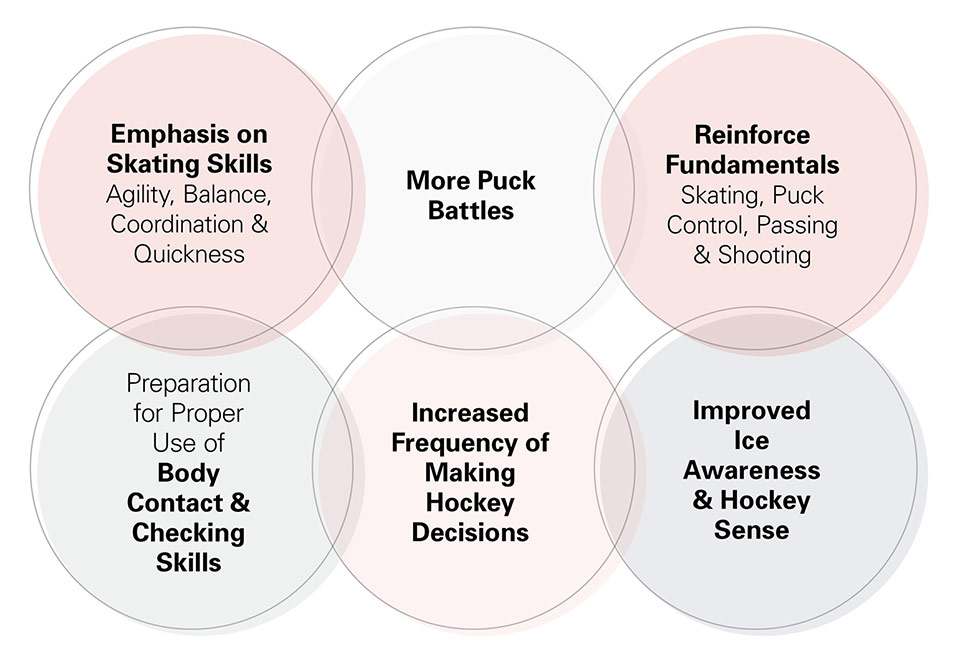 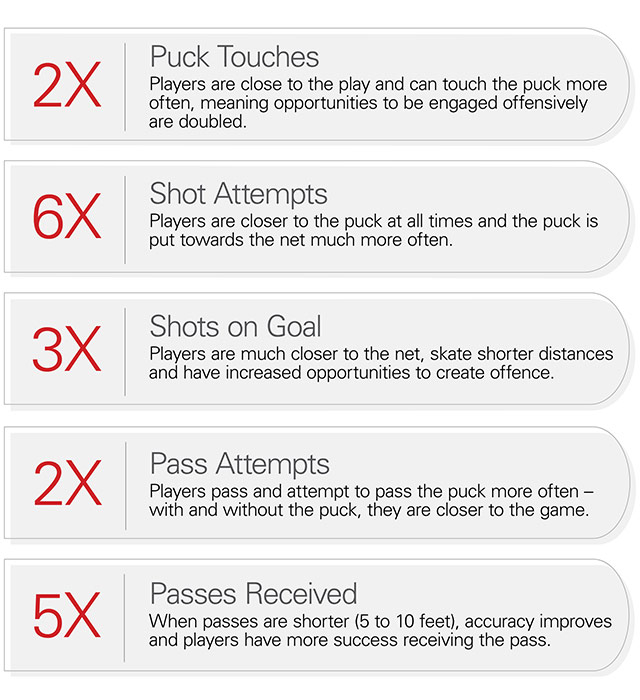 You have to be able to make plays in pretty small areas. The more you practice in small spaces the better off you are.”

Dr. Stephen Norris has consulted with Hockey Canada in the areas of player development and performance programming for a number of years. He was one of the founding members and contributors to the ‘Canadian Sport for Life’ movement focusing on athlete/participant development. Dr. Norris contributed to Hockey Canada in the design of the Long-Term Player Development Model and Player Pathways.

In each area outlined below, rationale has been provided and has been supplemented by Dr. Norris.

Player evaluation/selection cannot be scheduled prior to the start of the school year.

The notion of evaluations taking place weeks, if not months, in advance of the actual season for this age group makes very little sense due to the realities of child development during these periods.

The summer months are a time where youngsters not only consolidate previous experiences, but also advance their competency due to aspects such as recovery from earlier specificity, demonstrate adaptation of all previous experiences to new situations and activities over the summer months, and reveal growth and development opportunities that occur naturally – physical, psychological, cognitive, motor development, social, etc.

Everyone should understand that the return-to-school period (both the couple of weeks before, the week of and the ‘wash-in period’ until the student is settled back into the routine) is an extremely stressful period for the student.

Minimum of four practices and/or skill sessions prior to formal U9 player evaluation/selection.

There is a substantial benefit for children to have the opportunity to participate in four ice sessions prior to formal selection or evaluation. Players feel more relaxed and are able to perform at a higher level, compared to being evaluated in their first time back on the ice. By providing these opportunities, players are placed in a situation where stress has been mitigated and they are able to showcase their ability.

U9 Player evaluation/selection must be a minimum of three formal sessions. Recommendation is one skills session, one small-area games session and one half-ice game.

This follows the previous point of providing ALL players with the opportunity to re-engage with hockey. For example, it would be unacceptable for a school in the first week of September to give children an exam they must pass, or else the child would not be permitted to take that subject during the school year. This would be unacceptable to parents, yet this is the impact of evaluations early in the process before anything is taught.

Development time following team selection and prior to the start of the regular season.

Professional and/or knowledgeable individuals wishing to provide positive developmental experiences for children or youth should reinforce the need for an instructional or practice component prior to the start of the season. With the implementation of this policy, we are moving forward to not only accept, but welcome development opportunities for the betterment of players.

You need to be able to make quick passes and have quick communication. Small area games are important.”

Videos
More
Recent News
Most Popular
Jason La Rose - November 1, 2022
Officials set for international duty at home
Thirty-six referees and linespersons earn assignments to Langley, Delta, Cornwall and Bridgewater
Shannon Coulter - October 25, 2022
Skills to start a new semester
It’s the start of the school year for Hockey Canada Skills Academies, and finding different skills to evaluate players is key for planning lessons through the semester
Shannon Coulter - October 25, 2022
Support during the school year
From sharing resources and drills to additional coaching certifications, support is available as Hockey Canada Skills Academies prepare lesson plans
Jason La Rose - October 12, 2022
Officials on the path to excellence
Referees and linespersons have been selected for eight high-performance camps to begin a new season
Jonathan Yue - September 24, 2022
If you see it, you can be it
Growing the game beyond the ice, Courtney Birchard-Kessel, Tara Watchorn and Stefanie McKeough made history as the first all-women coaching staff in under-18 program history
MORE
Accept
Our sites use cookies to help streamline your experience and enable us to plan future improvements. By continuing to use our site, you consent to cookies being used. For more information about how Hockey Canada handles the information we collect, please review our privacy policy.
© Copyright 2022 Hockey Canada