Learn about the HCF Gala and Golf funding legacy

Since 2009, the Hockey Canada Foundation Gala & Golf has proudly contributed more than $4 million to various projects in seven Canadian communities, allowing the game to continue to grow and prosper from coast to coast to coast.

2018 – London, Ont. – $395,225
Half of all proceeds from the London Gala remain in the province of Ontario, specifically supporting initiatives to grow the game of hockey in London. Proceeds from the event have been put in an endowment fund, which has been targeted at ‘First Shift and Try Hockey Program’ attendees, assisting families in continuing their participation in hockey. 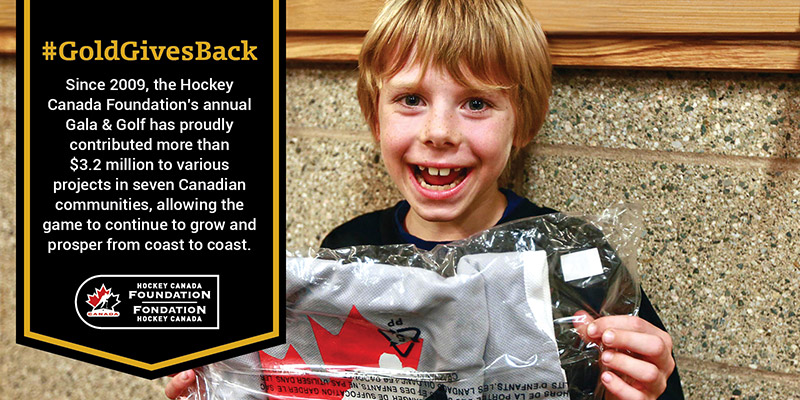 2017 – Saskatoon, Sask. – $333,000
In addition to celebrating Canada’s National Sledge Team for its gold medal at the 2017 IPC World Para Hockey Championship, the Hockey Canada Foundation partnered with four deserving groups to continue to grow the game on the Prairies. Legacy funds from the Gala & Golf were equally distributed among the Saskatchewan Hockey Association (to host cross-ice jamborees in northern communities), the Saskatchewan Hockey Hall of Fame (for capital upgrades to its facility in Swift Current), Merlis Belsher Place at the University of Saskatchewan (to make the facility adaptable for para hockey), and the Saskatoon Minor Hockey Association (for its Memorial Cup legacy fund). 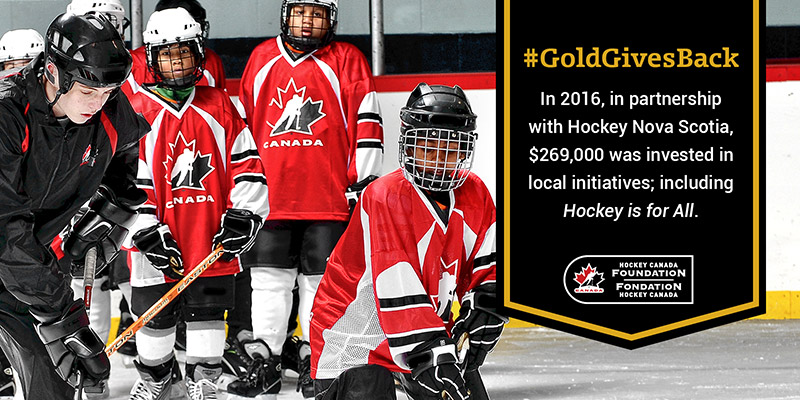 2016 – Halifax, N.S. – $269,000
With the Hockey Canada Foundation bringing the Gala & Golf to Atlantic Canada – and to a non-NHL city – for the first time, Halifax helped celebrate back-to-back gold medals at the IIHF World Championship. Half of all proceeds remained in the province of Nova Scotia in support of legacy programming and projects with Hockey Nova Scotia, the Sidney Crosby Foundation, and the Long Pond Hockey Arena Building Society. Hockey Nova Scotia used its funds to continue development of its ‘Hockey is for All’ initiative, helping introduce the game to black youth, new Canadians, Aboriginal youth and special-needs players. 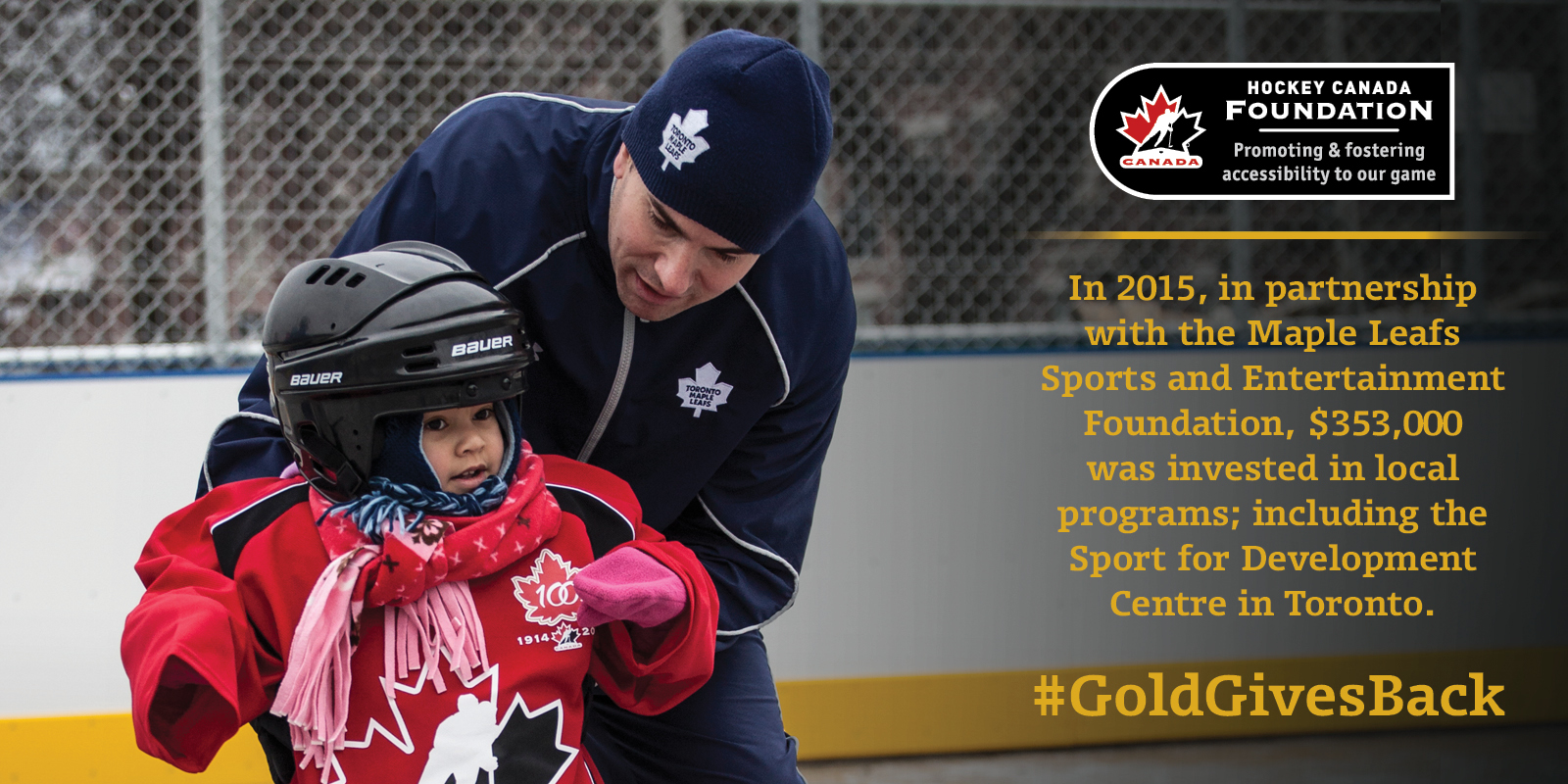 2015 – Toronto, Ont. - $353,000
In addition to celebrating Canada’s international success, including the 2015 IIHF World Junior Championship team and the 2015 IIHF World Championship team, the Hockey Canada Foundation continued their long-standing partnership with Maple Leaf Sports and Entertainment. A $353,000 Gala Legacy donation is part of the paralleled efforts with the MLSE Foundation to support active living, research and programming for Canadian inner city youth in the areas of hockey, basketball and soccer. The Hockey Canada Foundation will also be a leading funding partner in the MLSE led Sport For Development Centre at 261 Jarvis Street in the heart of downtown Toronto. 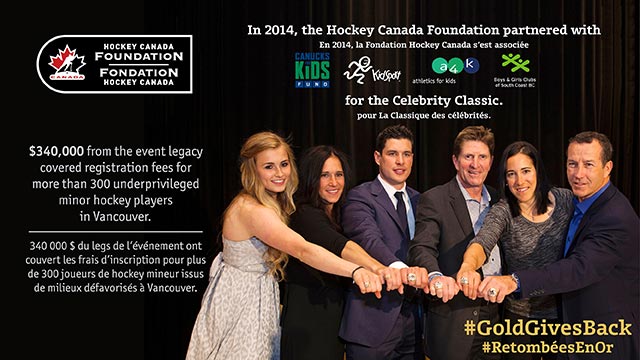 2014 – Vancouver, B.C. - $340,000
In addition to celebrating Canada’s men’s and women’s gold medal-winning teams from the 2014 Olympic Winter Games, the Hockey Canada Foundation partnered with the Canucks for Kids Fund to ensure legacy funding benefits KidSport B.C., Athletics for Kids, and the Boys and Girls Clubs of South Coast B.C., ultimately creating greater opportunities for underprivileged kids to enjoy Canada’s game. More than 300 minor hockey players in the Greater Vancouver area had their registration fees covered for the 2014-15 season thanks to funds raised at the Celebrity Classic. 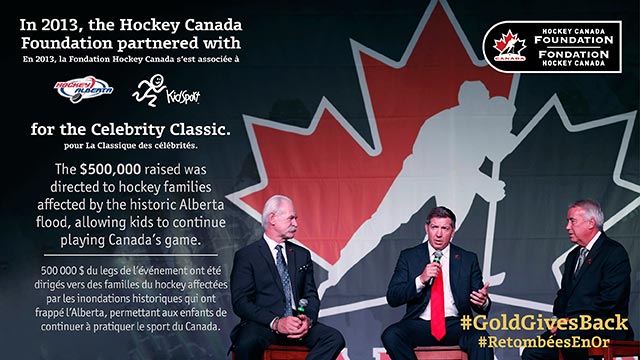 2013 – Calgary, Alta. - $500,000
A donation of $250,000 was made by the Hockey Canada Foundation to Hockey Alberta to assist families affected by June’s catastrophic floods in southern Alberta. The funds were allocated to local minor hockey associations to offset the costs of minor hockey registration fees, keeping players who had planned to play during the 2013-14 season involved in the game. In addition, another $250,000 has been allocated to KidSport Calgary, which aims to make sports such as hockey more affordable for underprivileged youth. 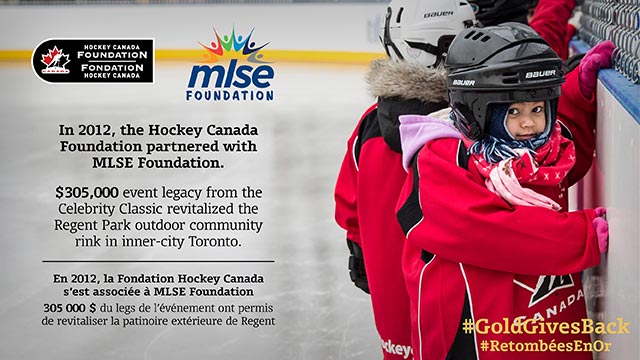 2012 – Toronto, Ont. - $305,000
The Hockey Canada Foundation partnered with the MLSE Team Up Foundation with a focus on the outdoor rink in Regent Park, as part of a larger revitalization project focused on one of Toronto’s most underserviced urban communities. The Regent Park rink initiative has benefitted those in the inner city of Toronto, providing the underprivileged with accessibility to a safe and well-maintained environment to participate.

2011 – Ottawa, Ont. – $420,000
The Hockey Canada Foundation, Sens Foundation and City of Ottawa partnered to construct the Rink of Dreams at Marion Dewar Plaza at Ottawa City Hall. The outdoor rink was completed in time for development activities during the 2012 NHL All-Star Weekend, and was a centrepiece when the nation’s capital hosted the 2013 IIHF Ice Hockey Women’s World Championship. It is open for skating between November and March, giving minor hockey players more accessibility to the game, and serves as a community space during the spring and summer months.

2010 – Edmonton, Alta. - $630,000
Thanks to the success of the 2010 Celebrity Classic, which honoured Canada’s men’s and women’s hockey gold medallists from the 2010 Olympic Winter Games in Vancouver, the Hockey Canada Foundation partnered with the City of Edmonton in allocating $400,000 to a community recreation facility – the funds supported one of the two rinks in the centre. In addition, the Hockey Canada Foundation matched an Edmonton Oilers Community Foundation grant of $230,000 for the rink refurbishment projects of two inner-city Beverly communities.

2009 – Montreal, Que. – $440,000
Inaugurated in January 2011, the outdoor rink in Willibrord Park in the Verdun borough of Montreal was the third outdoor multipurpose community rink constructed as part of the Montreal Canadiens Children’s Foundation’s BLEU BLANC BOUGE program, this one with a contribution from the Hockey Canada Foundation. The skating season at the rink lasts from the end of November until mid-March, while other sporting activities, including soccer and in-line hockey, take over for the spring, summer and fall months.

In addition to legacy funding, other proceeds from the event will go toward Hockey Canada Foundation programming that promotes accessibility and diversity in the sport, as well as other positive values such as health and wellness, Canada’s hockey heritage and skill development, from the grassroots level to Canada’s Olympic teams.

The Hockey Canada Foundation Celebrity Classic, which celebrates the season’s world championship-winning national teams while also raising funds for a local minor hockey legacy program and minor hockey programs across the country, has raised a total of more than $5 million in its first 10 years.

NWT: Thank you, Mel Davidson
Take a look back at memories from Mel Davidson’s long and decorated career with Hockey Canada.

2019 TCAA: Hitting the links for hockey
Over 140 golfers took to the course Sept. 12 at the Lakeside Greens Golf Club in Chestermere, Alta.

TCAA: Fantasy becomes reality for KPMG
For the 10th year, the Team Canada Alumni Association and KPMG partnered on a fantasy game for clients in Calgary.